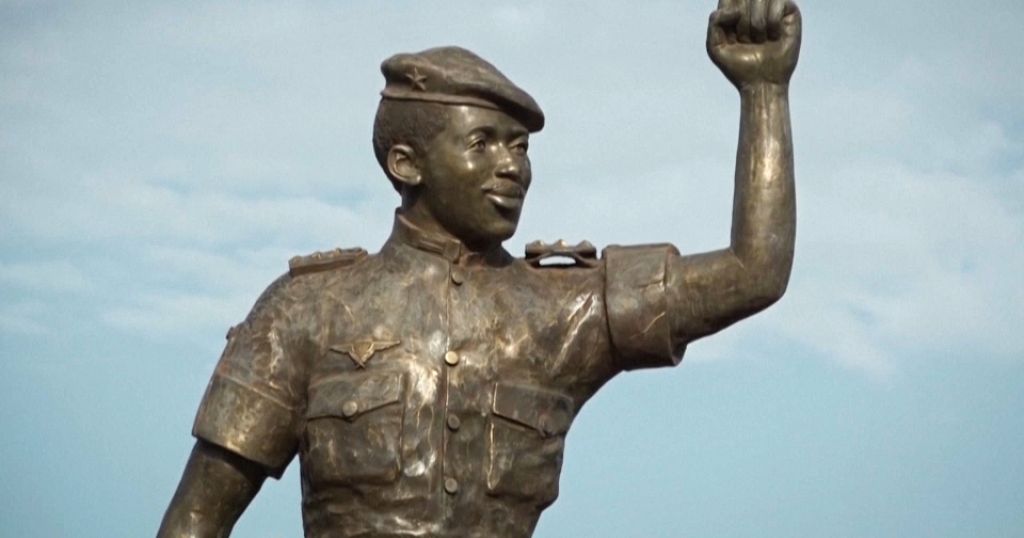 In Burkina Faso, many hope that the Sankara trial “will shed light on his murder”

Fourteen men, including a former president, will be tried in Burkina Faso for the assassination in 1987 of Thomas Sankara, the country’s revolutionary leader and Pan-African icon. Near the Thomas Sankara memorial site, where he was assassinated 34 years ago, street vendors and visitors say they expect the trial to “shed light on his murder.”

Nicknamed Che Guevara of Africa, Thomas Sankara wanted to “decolonize spirits” in Burkina Faso and across the continent, but his revolutionary dreams were cut short when he was shot in a 1987 coup after only four years in power.

The trial of the alleged perpetrators of the assassination, including his former friend Blaise CompaorÃ© who succeeded him as president and reigned for 27 years, opens Monday in the capital Ouagadougou.

Despite his short period in power, Sankara remains a revered figure for many.

During the mass protests that toppled CompaorÃ© in 2014, young people carried portraits of Sankara in the air – although many were not even born during the reign of the Marxist-Leninist leader.

â€œSankara is a whole philosophy, a way of thinking and being, a way of life. Sankara is a pride of Africa, â€said Serge Ouedraogo, high school teacher.

“Today, we can say that Sankara represents a compass for the BurkinabÃ© people. He is a guide, it is he who blazed the trail of hope for the people.”

Born on December 21, 1949 in Yako in the north of the poor and landlocked country, Sankara grew up in a Christian family, his father being a former soldier. He was only 12 when the country gained independence from France.

After completing his secondary studies in Ouagadougou, he followed military training abroad. He was in Madagascar for the 1972 uprising which overthrew President Philibert Tsiranana, considered by his enemies as a lackey of the former colonial power France.

Returning to his native country in 1973, Sankara was assigned to train young recruits and stood out in a border war with Mali in 1974-1975.

After a coup in 1980, the new leader, Colonel Saye Zerbo, appointed Sankara as his secretary of state for information. But the soldier’s radical views caused him to leave government a year and a half later.

Sankara was appointed Prime Minister in January 1983 after another military coup, which led to a quiet power struggle within the military.

He was arrested in May 1983 but was later appointed president in August after another coup d’Ã©tat – this one led by his close friend CompaorÃ©.

At only 33 years old, Sankara symbolized African youth and integrity for his supporters.

He changed the name of the country from Upper Volta during colonial times to Burkina Faso – “the land of honest men”.

He moved into a dilapidated presidential palace with his wife and two sons, as well as his guitar – he was a decent player, according to his contemporaries.

He also brought in a used Renault 5 and imposed the small French model as a car for all government personnel, removing the larger vehicles.

Slender and athletic, Sankara always dressed in military fatigues, and on his belt liked to display a pistol with a mother-of-pearl handle given to him by the North Korean leader Kim Il-Sung.

The priorities of his reform program included reducing the size of the civil service, improving health care, national literacy, food self-sufficiency, measures to help peasants, vaccination and the construction of pharmacies in the villages.

He banned female genital mutilation and forced marriage, among other measures to promote the rights of women, which he oversaw with an iron fist.

The population was monitored by the Revolutionary Defense Committees and sanctioned by the People’s Revolutionary Court, which opposed traditional tribal leaders and other holders of wealth and power.

“We must decolonize minds,” he proclaimed.

However, he began to crack down on unions and political opposition, ending a strike by teachers by sacking them.

Sankara also urged Africa to refuse to pay its debt to Western countries and spoke out at the United Nations to denounce â€œimperialistâ€ wars, apartheid and poverty. He also defended the Palestinians’ right to self-determination.

He was considered too close to Muammar Gaddafi’s Libya and Jerry Rawlings’ Ghana.

Sankara even gave FranÃ§ois Mitterrand a lesson in human rights in 1986 after the French president received Pieter Botha, the leader of the South African apartheid regime, in Paris.

“It goes further than necessary in my opinion,” commented the socialist Mitterrand.

On October 15, 1987, summoned to an extraordinary cabinet session, Sankara was struck down by his comrades during a putsch which left CompaorÃ© alone in power. He was only 37 years old.

30 celebrities with the same name

How to Use a Looper to Create Acoustic Guitar Soundscapes

Filmmore! patrols the school in a new video for ‘Where’s Your Hall…

Music will live in San Antonio

What conservative evangelicals have lost 6/24/2022