Last month, Johnny Depp appeared with Jeff Beck on stage to perform their 2020 collaboration “Isolation.” Now the duo are set to release a new album as Johnny emerges from the fierce six-week trial. Well, he got his life back, and the ‘Pirates of the Caribbean’ star is making sure he lives every moment of it. Besides being a successful star, Johnny Depp is a notable guitarist and longtime member of the Hollywood Vampires rock band along with Alice Cooper and Joe Perry. However, Depp started recording with Beck in 2019 and is currently joining him on his European tour.

Now, the legendary guitarist and Depp have announced a joint album titled “18” which will be released on July 15. The 13-track album is titled “18”. The duo revealed that they titled the album given the creative explosion they experienced working together. The ‘Yardbirds’ star said in a statement: “We would joke about how we felt again at 18, so that also became the title of the album. 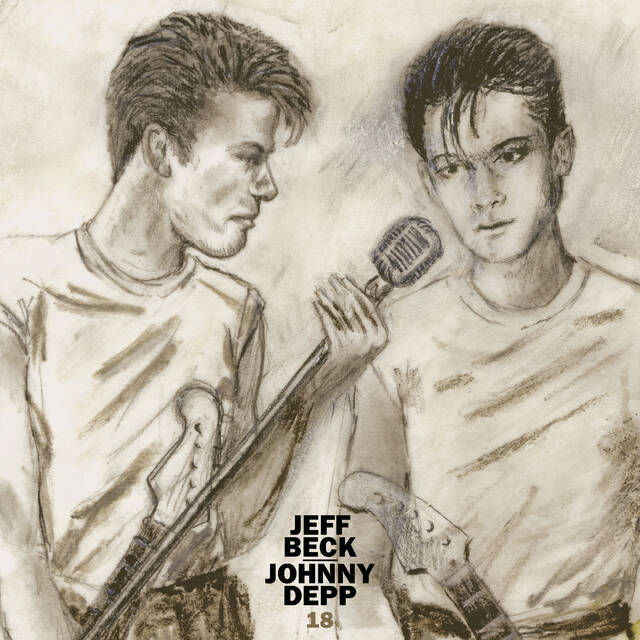 Johnny and Beck’s upcoming album features covers of the Velvet Underground’s “Venus in Furs,” the Everly Brothers ballad “Let It Be Me” and Marvin Gaye’s soul classic “What’s Going On.” The 13-track album also includes versions of Davy Spillane’s “Midnight Walker” and two songs from The Beach Boys’ masterpiece “Pet Sounds” – “Caroline, No” and “Don’t Talk (Put Your Head On My Shoulder).”

As for Depp, the 58-year-old star provided two originals, including “This Is A Song for Miss Hedy Lamarr,” which is the first single from the set. Interestingly, the album cover which includes a sketch of two young men in white T-shirts is designed by Beck’s wife, Sandra. Enough 18, right? Beck, who received a Grammy for Best Rock Instrumental Performer, is considered one of the greatest guitarists in history. Described by Rolling Rock as “one of rock’s most influential guitarists”, Beck is often referred to as a “guitarist’s guitarist”.

On the other hand, Johnny Depp started playing with several bands when he was 12 years old. Well, he even dropped out of school at the age of 16 to become a rock musician. Johnny has played with several musicians, including two members of Guns N’ Roses.

Before becoming a 21 Jump Street idol or playing a pirate version of Keith Richards, he wanted to be a rock star. Well, the Oscar-nominated actor may have made his mark as a successful actor, but his undying love for creating music never stopped.

The 58-year-old actor has maintained a regular gig playing in various bands and guesting on friends’ albums, often showing up at gigs to play a few songs. Now that Depp has won the libel suit against his ex-wife, he surely feels alive. Well, Jeff and Johnny are 18 again, and I can already predict “18” as a bestseller, what do you think?