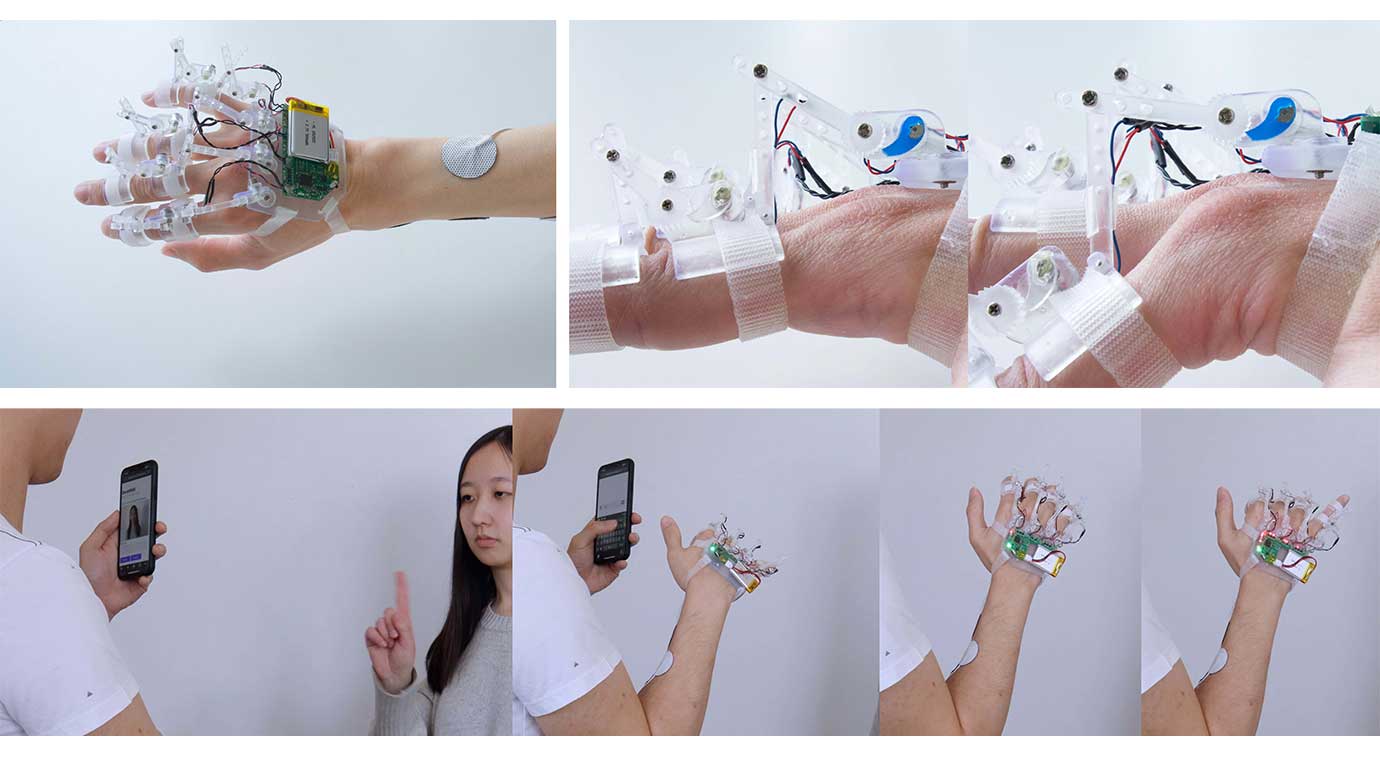 Humans use their fingers for some of their most delicate communications. Typing on a keyboard or phone, conversing in sign language, or playing guitar or piano requires finely tuned movement and coordination between several digits. But many technologies meant to control or augment these activities have struggled to recreate the precise gestures and movements they require.

A new solution from the Human Computer Integration Laboratory at the University of Chicago, led by Asst. Professor Pedro Lopes solves this problem with a combination of electrical muscle stimulation (EMS) and mechanical brakes. DextrEMS, a haptic device invented and developed by Lopes students in the computer science department: Romain Nith, Shan-Yuan Teng, Pengyu Li and Yujie Tao, fits discreetly on a user’s hand. While the EMS electrodes on the forearm move the fingers to the desired position, the ratchet brakes at the finger joints lock them in the target gesture and limit unwanted movement of the other fingers.

The work was showcased last week at the 2021 ACM Symposium on User Interface Software and Technologies (UIST), one of the top human-machine interaction conferences.

â€œDextrEMS is a way to operate human fingers through a computer,â€ said Nith, a second-year doctoral student. student. â€œIt’s the same idea as a traditional exoskeleton, where we provide force feedback to the fingers, but we wanted to approach it from the perspective of miniaturizing everything. By combining the EMS and the brakes, we can actually create movements that were not possible before and users can move the fingers independently.

EMS works by placing electrodes on the user’s skin and then sending small, painless electrical signals that cause the muscles to contract. To control the fingers, EMS electrodes are usually placed on the wrist and forearm, where the finger muscles originate. But due to this distance and the proximity of the muscles for different fingers, it is difficult to control the fingers independently. Even natural movement, controlled by the brain, struggles to move a single finger without moving its neighbors as well (try it!).