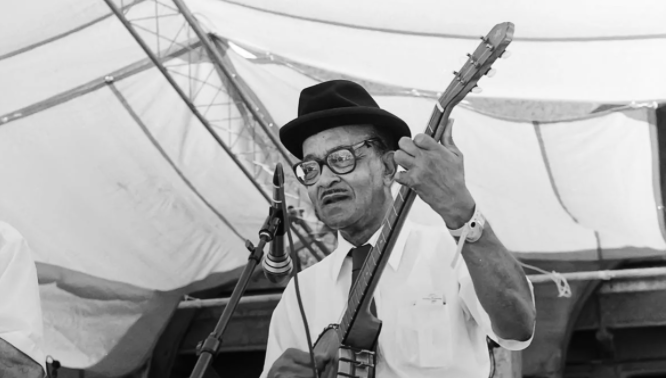 While the Danny Barker Banjo and Guitar Festival at the New Orleans Jazz Museum has been postponed until March 2022 due to the recent increase in the Omicron variant of COVID-19, the annual Danny Barker Birthday Tribute concert in Snug Harbor will take place as scheduled on Thursday January 13. Two sets of the Danny Barker Tribute Band will be held at 8 p.m. and 10 p.m. with smaller seats. Guests are required to present proof of vaccination or a negative PCR test dated within 72 hours, along with a corresponding photo ID for entry.

Each year on January 13, Snug Harbor and the New Orleans Jazz Museum pay homage to one of New Orleans’ most influential musicians, Danny Barker, on his birthday. Barker is dear to the longtime Frenchmen Street nightclub, as his band, Danny’s Jazz Hounds, performed in Snug Harbor for years before Barker’s death in 1994.

Daniel Moses Barker (1909-1994) was an American jazz musician, singer and songwriter from New Orleans. He was rhythm guitarist for Cab Calloway, Lucky Millinder, and Benny Carter in the 1930s. One of Barker’s first teachers in New Orleans was fellow banjoist Emanuel Sayles, with whom he recorded. Barker came of age in New Orleans at a time when jazz was still in its infancy. During a career spanning over 70 years, he has performed with Louis Armstrong, Billie Holiday, Wynton Marsalis and Dr. John. In the 1970s, Barker founded the Fairview Baptist Church Brass Band in New Orleans, which would reinvigorate the marching band tradition and bring it into the 21st century. Members included brothers Marsalis, White, Gregory Davis, Leroy Jones, Shannon Powell and Nicholas Payton.

Doors open at 7 p.m. and 9:30 p.m. before each set. All performances are currently sold at half the normal audience capacity, creating an even more intimate listening experience. For a full Snug Harbor concert schedule and to purchase tickets in advance, go here.

Guitar Lessons: How to Play 3 of David Bowie’s Best Riffs

Premiere: “I don’t want to be your dog anymore” – No Frills