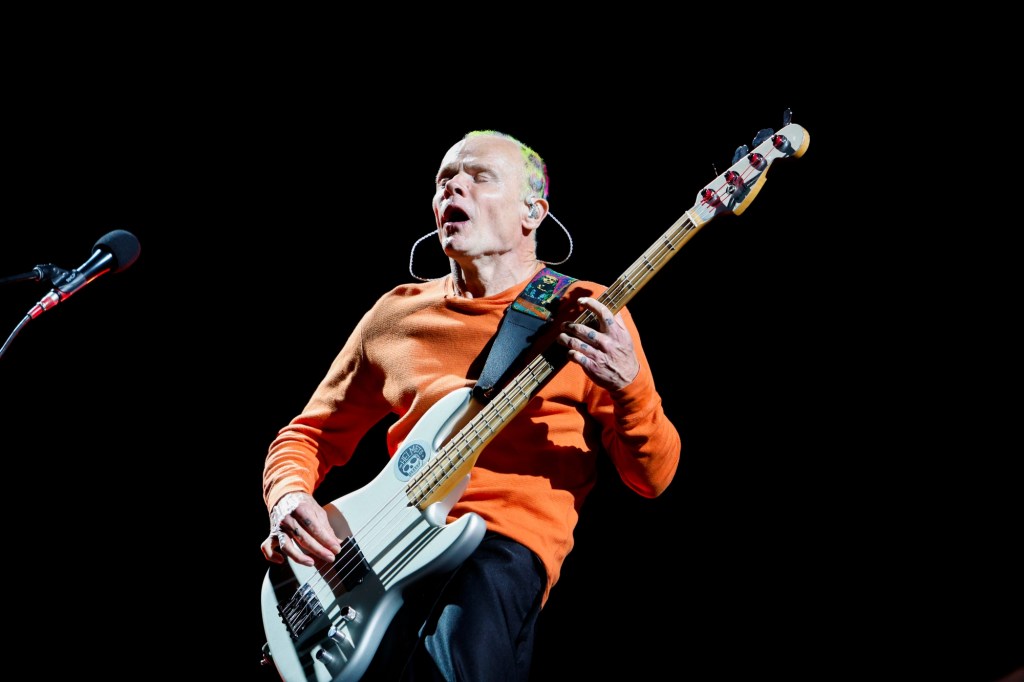 The Red Hot Chili Peppers took nothing for granted.

“We are deeply grateful and savoring every nanosecond of this,” Flea told the more than 50,000 fans gathered outside the band on Friday night.

The otherworldly bassist and his three fellow Red Hot Chili Peppers – vocalist Anthony Kiedis, drummer Chad Smith and returning guitarist John Frusciante – then showed their gratitude by shaking the crowd at Levi’s Stadium with an assortment of greats. successes and new cups.

It was a triumphant performance from these Rock and Roll Hall of Famers, who were in top form from the moment they took the stage around 8:50 p.m. and launched into a fierce jam that really showcased the fret work of the band. incredible Frusciante, enjoying his third stint with the iconic funk-rock band from Los Angeles.

As the swirling jam reached its climax, Flea and Smith’s deep rhythm work took over, quickly followed by perhaps Frusciante’s most memorable riff, then Kiedis drew a roar from the crowd as he bounced into the action and started singing the first lines of “Can’t Stop.

The Chili Peppers were just in manic energy mode at the start of the show, taking the title of the opening number to heart as they continued to cycle through a superb version of “Dani California” – the first of half a dozen numbers. that the band would perform that night from the brilliant 2006 double album “Stadium Arcadium.”

The group also spent a lot of time on their latest release, “Unlimited Love,” which was released in April. The band performed four songs from this album – their 12th release to date – beginning with an impressive run through “These Are the Ways”, which came sandwiched between some old favorites, “Universally Speaking” and “She’s Only 18”.

Unfortunately, the band hasn’t previewed any of the material for their upcoming 13th album, which will be called “Return of the Dream Canteen” and is slated for release this fall.

Still, it was hard for fans to quibble that they weren’t being played because they were so busy tracking such solid offerings as “Snow (Hey Oh)”, “Tell Me Baby” and “Black Summer” – the latter being a real highlight of the new album.

Through it all, of course, Flea delivered one breathtaking bass moment after another.

The beats he manages to squeeze out of his instrument are absolutely amazing as he continues to redefine and expand the place of the bass in popular music.

The band closed out the main set in a terrific fashion, delivering a golden “Californication” that paired with a powerful double-header with “Give It Away.”

The Chili Peppers dominated a cool musical evening, which kicked off around 6:30 p.m. with SoCal bassist extraordinaire, Thundercat. The Grammy-winning soul-jazz-funk artist, known for his own solo catalog as well as his work with Kendrick Lamar and other notable musicians, used his time to present his latest album, “It Is What It Is” from 2020, for fans as they entered the stadium and began to find their seats.

After Thundercat came none other than Beck, who took the stage as the crowd was still filling and started delivering a steady stream of cool numbers. The singer-songwriter, who said it was one of only two US shows he was scheduled to do with his band this year, took off as the set ended with the double dynamite header from “Loser” and “Where It’s At”.

Nothing stops the music at Petaluma Festival