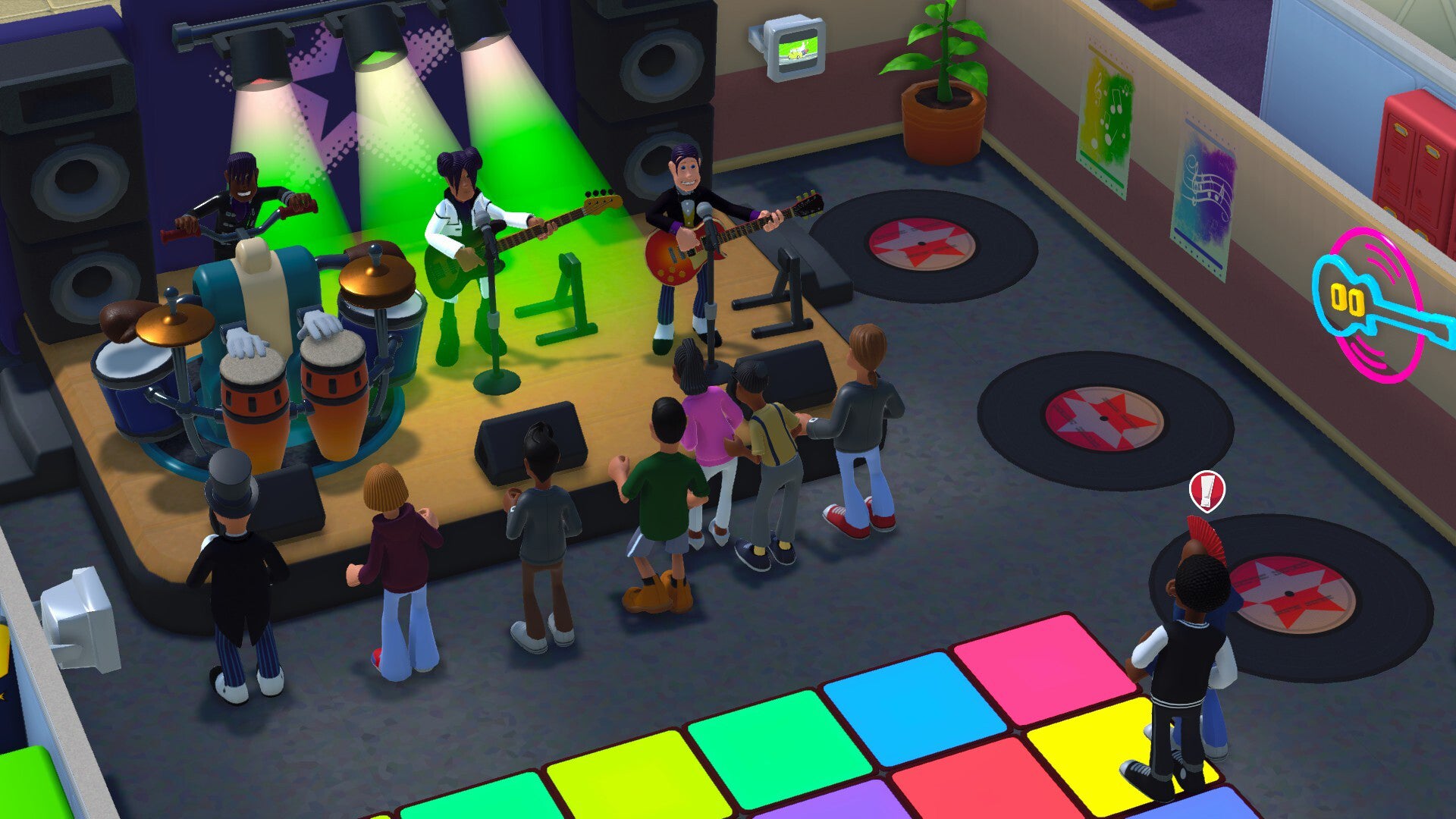 A long time ago, I was a muso. In school, I was the kid who never had a lunch or after-school break between choirs, orchestras, and jazz bands. In college, I spent as much time with the musical theater society as I did studying for my current music degree. And with Two Point Campus, it gives me an ultimate goal: to create the ultimate fantasy music school.

Before that though, the basics. For those who played the spiritual predecessor of Two Point Hospital, Two Point Campus will be very familiar. The two games are almost identical in their approach: take something typically mundane and turn it into a game, adding a healthy dose of quirky British humor. The controls are familiar and reassuring, the art style bright, detailed and easily readable, and college life is accompanied by a proper 80s soundtrack for all the gossip, John Hughes drama.

The game’s campaign is essentially an extended tutorial, with each new level providing new challenges to explain core mechanics and systems, and serving as preparation for the endless customizable sandbox mode. Each campus begins as a blank list of buildings ready to be filled with lecture halls, classrooms, dorms, bathrooms, private classrooms, libraries, and more. Staff must be hired to teach, clean and keep students happy. Students have their own needs which appear as mission requests: I need a party! I need a library to study! I need a love bench! (More on that later).

The systems gradually layer up but never feel overwhelming, thanks to a forgiving difficulty curve. The main challenge is balance: build too much and hire too many staff and you’ll quickly run out of money and be forced to take out an expensive loan until more unwitting students join the chaos. This is done by adding marketing rooms to attract new students, but must be balanced with supporting existing ones, who will need pastoral and medical care to get to graduation.

Then there is the balance between tuition and entertainment: between classes, students can join various clubs to improve their learning or walking speed, while student unions can organize pop concerts and lecture halls can show films. There’s endless fun juggling the day-to-day – always a new room to build, students to help, teachers to train – but what really elevates Two Point Campus beyond a collection of intelligently interconnected systems, it is its charm.

It’s there in the randomly generated names, the tannoy announcements that spring from college snaps, the wacky animations of every student in class. Half the fun of the game is unlocking a new course to see what wacky classroom can be set up next, then watching the students in their silly costumes. The humor never gets boring and somehow it all comes together to make you care about those tiny virtual people.

This is aided by the Friendship and Romance system, one of the game’s big new additions over Two Point Hospital – ideally college isn’t a quick back and forth like a trip to college. hospital, after all; students settle for up to three years of study. Placing benches, water coolers, and other objects on campus encourages little androgynous students to befriend each other; add love benches, a romantic double bed or a love trumpet (yes, you read that right) and they’ll take that friendship to the next level.

In reality, relationships don’t have much impact on gameplay beyond increasing student happiness, but they do go a long way in adding color to each campus. I found myself creating storylines for the students, following their lives for three years, from innocent freshman to proud graduate – despite my mismanagement.

On my gastronomy campus, for example, between giant pizzas, cakes and burgers, I inadvertently created a school for gay chefs. (Relationships at Two Point Campus are wonderfully inclusive.) At the Fluffborough Sports Campus, it was really the story of star cheeseball player Isaac Stretchfore, who took a moment to dance onto the court dressed as a mouse, before throw a wheel of cheese in a nice curling shot to win the game against our rival school. Elsewhere, gay jock soulmates Ace Tacklebag and Asquith Peppermint have spent way too much time in the gym doing static bikes together.

Each new campus has its own quirks, from new ways to generate money to certain (un)natural disasters, providing a constant thread of twists and turns to further challenge your management skills. On the archeology campus, for example, any finds you dig up can be sold for extra cash, but the hot climate meant students suffered from rampant body odor no matter how many showers I have put – relatable during this hot summer.

Things also took a turn at Knight School. First, the school was overrun by rival sword-wielders bent on wreaking havoc, though I quickly trained my security janitors to chase them away with water guns. Then the students needed medical attention for Knight’s Knee (spending too much time on their knees) and Rusty Bulge for training in the rain (no snickering from the back). This meant building medical facilities in a nice nod to Two Point Hospital.

Then there was Hogw-Spiffinmoore. When not overrun by “life eaters”, the campus suffered lightning strikes and meteor showers from an evil witch. Poor Reg Pungent the Goth was aggravated and needed extra pastoral care, while Imogen Lemon and Slayer Windchimes found friendship in the student lounge, sitting shyly on the sofa as the storm raged outside. outside. I have no idea who allowed Nigella Fromage to sign up.

I particularly enjoyed this wizard level exploring the game’s customization options – another area where Campus improves on Hospital and adds considerable depth. Kudos earned by completing student requests can be spent to unlock various themed decorations to place on campus, both indoors and outdoors. Here, that meant placing gothic bookcases, owl statues, and candles along the hallways between the potion and dueling rooms, while brooms, runestones, and hearths lined the outer walkways. It’s possible to spend hours tinkering with decorations to create the perfect school, although I wish the kudosh could be earned a little faster – too often I’d spent it frivolously on fancy decorations instead important things, like proper learning facilities.

Eventually I unlocked Upper Etching and its music lesson. My mission to create the ultimate music academy could finally get off to a good start. After a (typical) post-party cleanup, I filled the campus with all the usual requirements before adding a recording studio and setting up some weird instruments – weirdly, the students also needed a breakout room. sport, even though I never did anything remotely athletic in college myself. The rooms were decorated with record rugs, neon guitar signs, popstar posters, and a pride-themed student lounge. At this point, between knowing the many interlocking systems of Two Point Campus and a wealth of customization options, I truly felt I could build a living school that reflected me.

The systems are multiple, the customization options deeper. But it’s the finer details and the British jokes that bring this parody world to life.

Once the students signed up, it all started. Fabio Volcano was found constantly playing the saxophone in the hallways; Rob Jazz danced in the dorms, until he failed the year; Byron Grunt suffered from too many milkshakes (sounds legit); Mick Eruption was a genius with the punch and kick drum to score top marks; Hester Blancmange was a parody on the open mic night (some in-house entertainment); and Honey Fingers and Wrenchy Peregrine couldn’t hold hands at the love bench. In fact, the music campus ended up with a much higher connection rate than any other – the musos are very excited, aren’t they?

Was it all true to life? Well, it wasn’t always far. In the world of Two Point, music lessons are free, which I sure would have been jealous of when I was younger – even though I soon ran out of money for new facilities and couldn’t train the next generation of pop stars. But let’s not get into the issues related to the cost of education in the UK.

Having already proven itself in management simulations with Two Point Hospital, developer Two Point Studios has taken a step forward with Two Point Campus. The systems are multiple, the customization options deeper. But it’s the finer details and the British jokes that bring this parody world to life. As the game’s tannoy announcements constantly note: “Students are reminded to meet up.” Jokes aside, Two Point’s latest really captures that.

Music school is changing the world, one Rockstar at a time – Cross Timbers…